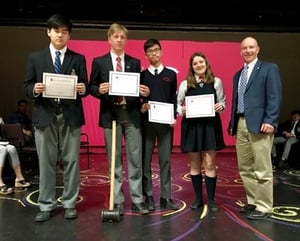 Senior Boys - Evan Logan performed exceptionally well during the Senior Boys Rugby team's close win against Avon View on May 3. Evan led a spirited defense and took the ball with speed every time he was directly involved in the play. We hope the team finds inspiration in his performance during their games against Horton and Avon View on the 10th and 17th.
Senior Girls - Hannah Benedict - In our final game of the Rothesay tournament, it seemed as though the game of rugby ‘clicked’ in Hannah’s mind. She ran with confidence and poise, and allowed her natural athleticism to shine through. In our third-place game, Hannah scored her first try of the season to help us secure the 36-0 victory. Later in the week in our very first league game against the always tough Griffins from Horton, Hannah again made her presence felt and led our team with two trys on the day. With every passing game, this first-year Grade 12 player is demonstrating more confidence and is proving to be a very important element of both our attack and defense.

Junior Girls - Paulina Galvan - After returning from a quick visit home to Mexico, Paulina picked up where she left off earlier in the season this week. In our first ever Junior Varsity game, this Grade 8 student played the all-important fly-half position and scored both of our two trys on the day. Later in the week, Paulina again stepped in at fly-half and was in control as our girls cruised to a victory over Central Kings. It is apparent that despite her age, Paulina will provide us with athleticism and competitiveness off the bench as we progress through our season.

Junior Boys - A new comer to Ultimate, Santiago Caballero is a force to be reckoned with on the Frisbee pitch. His throws are hard and accurate and his bursts of speed and anticipation of play make him a difficult mark and an outstanding defender. Santiago is a great competitor who keeps a calm and level head regardless of the pressure he is under. He is also a keen learner always looking to improve his skills, while supporting his teammates. At the recent ACIS Ultimate tournament, Santiago worked hard with his team against some very skilled and athletic competition. Though the team did not advance to the final, Santiago gave it his all and represented himself and his school brilliantly. Well done, Santiago.
For the Week of April 30 – May 6

Senior Boys - Tin Long (Anson) Chan was absolutely brilliant at the most recent NSSAF High School Provincial Table Tennis championships. He went undefeated and led our Senior Boys team to their first championship since 2011. Anson was above all a credit to the sport and to our School. He did not advance to the provincials last year, even though he went undefeated, since advancement is only by team. He made the best of his opportunity this year. Always a gentleman, he won each of his games while even winning fans from his opponents and their coaches. There was a lot of pressure on Anson; he was always very humble and showed the utmost respect to his teammates and opponents. This was evident from the many accolades shared from coaches, parents and opposing athletes. There were no fist pumps from him or his teammates upon winning the championship, only respectful handshakes all around. Congratulations to Anson and his team.

Senior Girls - Ximena Hernandez’s play on the rugby pitch last week was very strong. She began to show a real understanding of the game in our tilt vs Central Kings on Tuesday and followed that up with very strong play in both of our games on Saturday. Coming off the bench vs Avon View, Ximena didn't miss a beat and rucked and tackled as well as many of our experienced girls. As we enter the final stretch of our season, it is clear that Ximena will be able to provide us valuable minutes in the field. Great job!

Junior Girls - Maya Faucher played exceptionally well in both our games this past week. Although only in Grade 8, Maya was a leader in the pitch on our Junior Varsity team. In our game versus Central Kings on Tuesday, she was leader in our pack and was inches away from scoring our only try of the game. Later in the week against West Kings, Maya took the ball from the back of a ruck and exploded through the defense and slammed the ball down for her first (of many to come) trys with the Senior team. Great job, Maya!

Junior Boys - Haichuan (River) Qi was spectacular at the most recent NSSAF Provincial School Table Tennis championships. He went undefeated in the Senior Boys team competition contributing to the teams’ Provincial Championship success. When questioned by a parent of the second place team about how many of the KES team would be returning next year, she was astonished to hear that River was only in Grade 9. Other than Anson, River was certainly the one to watch in the Senior Boys division at the event. Congratulations, River!
Athletics is one of the four pillars of a King's-Edgehill education. Sports are mandatory at every age and part of the day's schedule. With that much time devoted to physical activity, it's a good thing we have so many choices! Have a look at all the different options: Download the Athletics Photojournal. 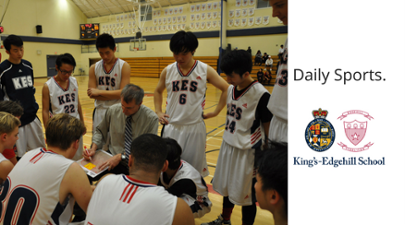