Athletes of the Week September 2019 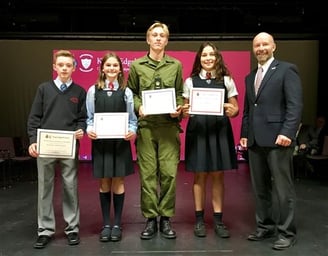 Athletes of the Week (AOW) are selected based on athletic performance and sportsmanship. Positive sporting behaviour is valued at KES and integral to our Athletic Philosophy and School Mission Statement emphasizing gentleness and learning and dignity and respect.

Until the week of September 22nd

Junior Boy - Vincent Armstrong played a pivotal role as the sweeper during a recent soccer match versus Wolfville. His leadership abilities and athletic skills were evident as he directed our back line with strength and experience. His field awareness was key to helping our team remain competitive. Well done, Vincent.

Junior Girl - Eva Palov, a Grade 8 student from Bedford, NS, had a fantastic start to her KES Senior Girls’ Soccer career as she played major minutes at the Top of the Hill Girls Soccer Tournament at Rothesay-Netherwood School, New Brunswick, September 13th & 14th. Playing in multiple positions on the field, Eva made an immediate impact to the programme and contributed 2 goals in 3 games. Keep up the great work, Eva!

Senior Girl - Allie Martin, from Halifax and in Grade 11, was a tremendous leader at the Top of the Hill Girls Soccer Tournament at Rothesay-Netherwood School, NB, September 13th & 14th. Playing the attacking midfield position as well as at centre-back, Allie was instrumental in involving her teammates, sharing the ball, being available for supporting passes, and she ran her socks off. Allie scored twice and provided assists on other KES goals. When Allie is not playing soccer, she can be found playing on the Prep Girls Hockey team.

Senior Boy - Evan Logan was outstanding in the Senior Boys D1 Season League opener at Horton. The game ended 1-1, but if Evan hadn’t been on the field it would have been very different. He was a leader at the back and scored the equaliser with a powerful header. Evan also got invited to a Canada Rugby Regional Identity camp which took place, Friday, Saturday, and Sunday in Wolfville.
Athletics is one of the four pillars of a King's-Edgehill education and why we offer three seasons of various sports and athletic programmes. Download our Athletics PhotoJournal to discover which of the over 20 different options your child will love. 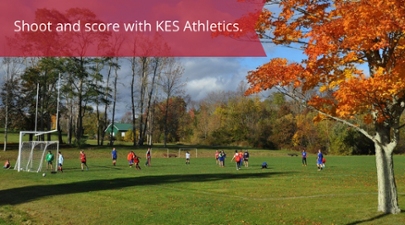