Every day this week I walked past a pair of earbuds sitting on a hallway desk in the senior academic wing. Each time I could not believe that they were still there. Unclaimed and literally open for the taking, no one had touched them. Taking them would be so easy and yet there they remained, testimony to the honesty of the community. I had to wonder how many places in the world this would happen? I suspect not many.

Recently, I had a chance to speak with the arena staff for both hockey arenas that our students use. Both were effuse in their praise of our teams – not for their play on the ice, but because our students spoke so respectfully to them and left their dressing rooms spotlessly clean. As Shane from the Newport Arena said, “I go into the dressing room after a KES team has left and there is nothing to clean. A little sweep is the most I ever have to do.”

At the end of the holiday the staff in Marshall House were given two delicious boxes of Delecto truffles. They come wrapped in cellophane. Both were placed in the staff snack area. The first box was quickly opened and enjoyed. However, I noticed that the second box, still sealed in cellophane, had remained untouched. On Wednesday night I was in the office around 8:30pm and, feeling peckish, I removed the outer wrapping and enjoyed a truffle. To my delight the chocolates did not survive another day. We are exceedingly polite here in Marshall House. No one wants to be first, but clearly once a box of chocolates is open no truffle is safe!

Each week has its gems. Moments in time that capture a truth or reveal something meaningful. Sometimes it is as simple as seeing our students grow. I am convinced that Jakob Rusaw grows an inch a day (well over six feet he must be closer to seven feet by now). It is remarkable how strong Quinn Emery and Ella Brown are becoming as first year members of the wrestling team. Righo Etou has been here since Grade 6 and is now in his fourth year in Grade 9. Watching this muscular six foot two inch boy/man play Junior Boys Basketball like an NBA All Star is as impressive as it is confusing: when did he become such a strapping and superbly coordinated young man.

My highlight of this week occurred on Wednesday night. A game of touch rugby was being played in the gym. I joined in and was instantly welcomed by the students. To my delight I was on a team with Alex Otto (Grade 12). Opposite us on the other team was Alex’s sister Kristen (Grade 10). Both are skilled players and very competitive. Seeing the two of them try to score against each other was fabulous. Good fun, happy smiles, and a healthy sibling memory together. Where else do you get to play rugby with your sister?

This week in photos 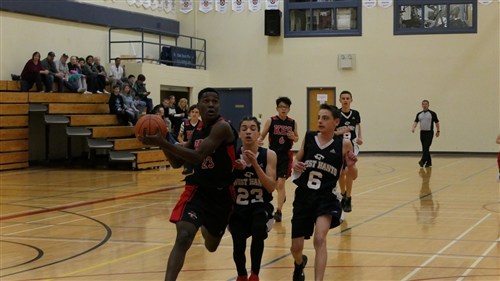