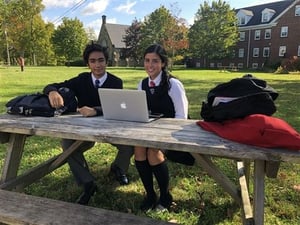 An interesting thing happens when we turn our brilliant LED stadium lights on at night: the light removes the darkness on campus. Sounds obvious of course, but in removing the darkness we remove fear. We also create community and opportunities for joy that did not exist before.
With the turf field brightly lit, the evening snack after prep is better attended. Girls and boys from the satellite houses around the field (Buckle, Vincent, and Vair McLellan) are more likely to make their way to the Dining Hall to join their friends. Although we have street and path lights, the reality is that without the turf’s stadium lights, the walk is darker, the shadows deeper, the trek more intimidating.
Last night after prep, 22 students joined me and Mr. Foley to play touch rugby under the lights. It was glorious fun. Playing with us were not only boys and girls, boarders and day students, but a parade of nationalities: Canada, Ireland, South Africa, China, Japan, Finland, and Mexico. Feeling a bit like rugby stars under the lights, we played until call-up for “lights out”. While we were playing, a single female student ran around the track circling us again and again for the better part of an hour. I marvelled at her, but it was my wife Belinda who remarked how, without the lights and perhaps without us playing on the field as well, it is unlikely this girl would have felt safe running alone in the dark.
The American poet, Robert Frost, once described the nighttime forest as being “lovely, dark, and deep”. However, this is a rare observation. Being scared of the dark is much more common. Scores of writers from Edgar Allan Poe to Shakespeare to Anne Frank (as a teenage girl she wrote how a ‘candle can defy and define the darkness’) have described the night or darkness as anything but lovely.
Our LED stadium lights are the first of their kind in Atlantic Canada. They are absolutely incredible, shining a shadow-less light that is direct and does not bounce or wash across the Town of Windsor and the residential areas adjacent to the School. They use so little electricity that they operate for under $5 an hour. Despite being higher than our tallest tree on campus, they have withstood everything Mother Nature and Hurricane Dorian have thrown at them in the last year.
My appreciation for these lights is growing daily. Their benefits are beyond what first meets the eye.

PS: Parents, your child's first progress report of the year will be available online Sunday, October 6th.
The Week in Photos 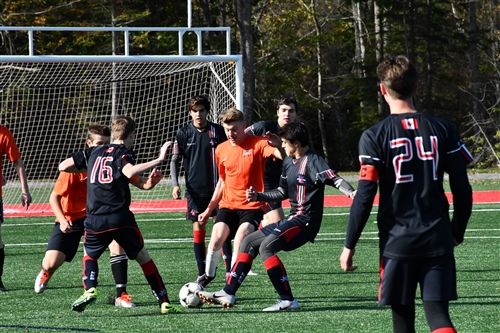