Lest We Forget – Remembrance Day for the 254 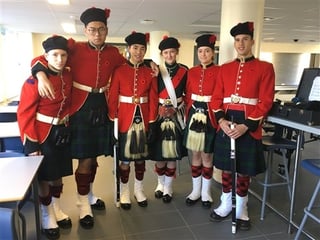 Our 254 Cadet Corps was in full dress mode for Remembrance Day 2017.  The Corps was spread out with 12 cadets in Ottawa under the guidance of Mr. Kevin Lakes as part of Operation Veteran.  In the Town of Hantsport, a Flag Party commanded by Sergeant Major Charlotte Hache was piped on parade by Master Corporal Grace Gallant. Click here to see the video. The main body of the 254 paraded at the Cenotaph in the Town of Windsor.  Though the day had a bit of a cold bite, there was very little effect on the individual cadets.  As the Regimental Sergeant Major, Chief Warrant Officer Ella Jollymore gave the word of command – "By the Left – QUICK – MARCH", the Corps moved off and marched down to join the Veterans and the public at the Cenotaph.  The cadets looked splendid -- some arrayed in traditional Highland dress and the others in Army Cadet Greens.  The haunting notes of Last Post and the rousing Reveille were played by the Corps Bugler, Sergeant Ella Brown.  The Lament was played by our own Pipe Major, Warrant Officer Nicola du Toit.  The Vigil at the Cenotaph was commanded by the Drill Sergeant Major, Master Warrant Officer Meredith Chambers.  The official wreath from the Corps was laid by none other than Lachlan Campbell, aspiring cadet and son of KES teacher Mr Rory Campbell and Dr Amy MacDonald.  Junior Cadet Campbell was accompanied by Sergeant Major Julia Strickey.
Upon completion of the Windsor ceremony, the Corps marched back to our campus keeping the cadence to the Brass and Reed Band under the guidance of Drum Major Andrew Canete.  The ceremony at the School Cenotaph was memorable with the Brass and Reed accompanying Sergeant Ella Brown in a moving rendition of the Last Post. The youngest cadet Elena Julienmarched sharply to the front and, with a smart salute and impeccable drill, laid the wreath for the Corps.  No trace of nervousness, just sharp drill.  As the Headmaster read from the Roll of Honour and Reverend Curry gave the benediction, there was time to pause and reflect about Remembrance Day and the dignity and respect accorded this most solemn of days by the Cadets of the 254. We will remember them.


As you can see, Boarding Schools are not dreary places, nor are they only for the international elite. The Canadian Accredited Independent Schools (CAIS) is an association of Canada’s best independent and private schools. Download the article that addresses these and other myths about boarding schools here. 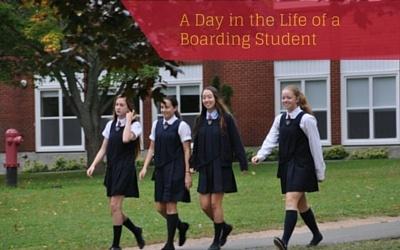