On Tuesday morning, earlier than expected, students were out of their beds snapping mousetraps all around campus. “What on earth could they be doing?” you may ask. Well, it turns out all Grade 10 Science students were putting the final touches on their latest project. 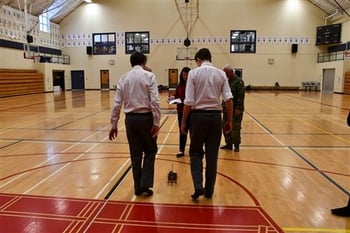 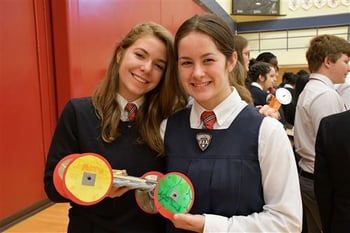 In mid September, all of the students involved were presented with a challenge. They were to build their own vehicle that was to be powered by a single mousetrap. Students were given some direction but mostly it was up to them to choose what to build. They were allowed to use pre-manufactured wheels only (all other parts were built). On Tuesday, each group ran their cars in the gymnasium. Each car needed to run two meters minimum, but many ran for ten meters! Some even went the entire length of the gymnasium. Each car was timed so average velocity could be calculated for each run. In the end, extra points were awarded for the fastest car and the most beautiful vehicle.
The gymnasium was electric as the students lined up to race their cars! A great time was had by all as everyone saw Newton’s Laws in action.
Achievements like this make parents so proud! We find that most parents of King's-Edgehill students are happy to help out whenever they can and are eager to answer any questions prospective parents might have. Let us know if you would like to connect with a current parent.