Online debate tournaments have continued into the spring, and I'm super happy to report that 2 of ours, William Ahern and Thane Morgan, advanced to the final round of this past weekend's Senior Level Ontario Student Debating Union Tournament.

Teams from some of Canada's most established programs from Winnipeg, Toronto, Ottawa and Montreal were in attendance, and of the 20 teams, 2 advanced to the final.  After a tough round on the subject of police brutality, our KES A team finished in second place.  They should be very proud of the attached tabulations! 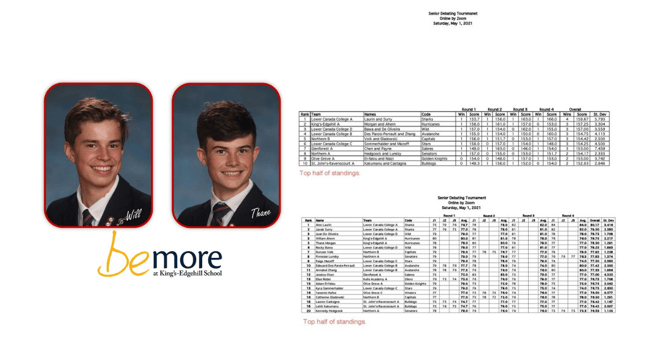 Debating from one's home has its benefits, namely convenience and a release from debating in School uniform. Pictures of what Zoom debating looks like are also attached.
Once again - well done Will and Thane!
The Junior level of this event is scheduled for May 15th.