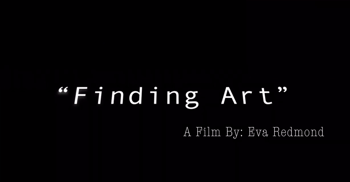 Grade 11 student, Eva Redmond, arrived at King's-Edgehill School from Gander, Newfoundland last September with her camera and her cornet in hand. Within a couple of weeks, she became a lead player in every KES band, took center stage with the ensemble of our production of Mamma Mia!, and, won an internal promotional video contest for her piece on the opportunities that KES has to offer perspective new students. She also co-founded and rekindled a photography club on campus that has amassed quite a few like-minded shutter bugs. Last week, Eva submitted a 'short' video in the Halifax FIN Kids Film Festival. Her video is focused on The Arts and how they are valued by all and fill a necessary need in life's fulfillment. She was delighted to get immediate news from the competition committee that she passed the semi-finals and that her film would advance to the finals. Last weekend, Eva attended the Festival viewings and walked away a Winner! Eva just might be giving Steven Spielberg, Kathryn Bigelow, and other producers/directors some competition in the near future! Please take the time to view her video; I am certain that you will be impressed too. Congratulations, Eva!

One Tuesday afternoon after photography club, I was hanging out in the Art room, kind of in the mood to do some filming. So, I ventured to the back where Sophia and Abigail were working on their art pieces. They welcomed me to film them, and that's how it all started. A couple weeks later I stumbled upon the film festival online and thought, Perfect! I'd finally have a use for the footage I had started to throw together. I started planning the layout of the video and asking people to take part. What was really an important aspect for me was the comfort the Arts bring to youth and students of my age group. I have been shown time and time again since arriving at this School just how much the Arts mean to people, and sometimes they don't get the credit they deserve, so I thought, what a perfect time to showcase them. In the beginning of the piece, the Arts have been taken away and people react in just raw footage. Later, of course, the Arts come back and you see the light it brings to everyone's life. While interviewing, I simply told people, "Pretend the Arts were all instantly taken away; how do you feel?" at first they found it funny, but by the time we got a couple minutes in, you could feel the real fear and anxiety they had just thinking of this. That's when this project became so much more real and more than just a film to me. I had to show the world how the Arts genuinely affect our lives and just how important they are. I had to do this for all the artists to have a voice. I am so thankful that the judges saw that and that the piece had a chance to be seen by others, and I hope that they saw the importance like I did.

Jeff Smith
Director of Visual & Performing Arts
You’ll find countless opportunities to express your artistic interests at our School. The Arts make up one of the essential four pillars of a King’s-Edgehill School education. 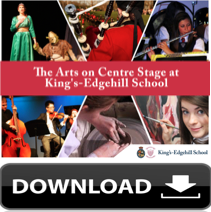